There has been many changes to OneDrive over the years and across the different Microsoft Windows versions; from Windows 7, to Windows 8 and 8.1, and now Windows 10. However, one thing has remained the same, OneDrive’s inability to work on removable drives right out-of-the-box. We were able to overcome this in Windows 8 with this earlier tip.

Why would you want to do this?

The main reason is because your computer or tablet has limited space, generally between 64GB and 512GB. This system drive is typically a lot faster than removable drives, so it is better used for applications. However, once you install your necessary (and unnecessary) applications, like Microsoft Office, Adobe Photoshop, Minecraft and a myriad of other programs; your available free space gets fairly small for your own personal data, like documents, pictures, music, videos, and other files. This is where OneDrive’s cloud storage and a large removable drive can work together very well. For example, I practically doubled the storage on my 128GB Microsoft Surface Pro 3 with a new 128GB micro SD card inserted behind the kickstand. Here’s the one I’m using from Amazon.

So here’s how to get around it in Windows 10 (thanks for the tip Brian!). If you’re a tech geek, format your removable media as NTFS, create a dynamic virtual hard drive on it, and point OneDrive to the virtual hard drive.

If you’re not (yet) among us tech geeks, below is a step by step guide on how to get OneDrive to sync data to the removable drive. I have broken the major steps into multiple pages to make it easier to follow (unlike my earlier super-lengthy article on How to Sync SkyDrive to a Removable SD Card in Windows 8).

One major concern is, “What if I remove the micro SD card?” Well, if you remove it while it is actively reading/writing, then you may corrupt your data. This would happen to any removable drive whether it is connected to OneDrive or not. Because OneDrive does a lot of file syncing in the background, it is hard to know whether it is active or not. Therefore, do not remove the micro SD card or USB drive without right-clicking the drive and ejecting it first.

If you remove it after properly ejecting the drive, it should be fine. I have had to remove my micro SD card a few times to access other micro SD cards from my Windows Phone and cameras. Here’s what happens when you do. Below is a screenshot of the micro SD card removed on my Surface Pro 3.

Now, if you try to access your OneDrive, you would get a “Location not available” and/or an unable to find OneDrive dialog box(es). 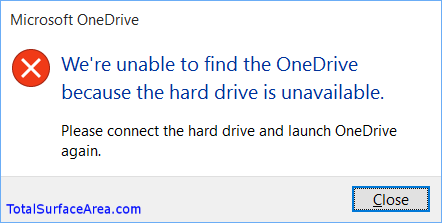 Once I inserted the micro SD card, the drive appears in File Explorer.

Trying to access OneDrive now would yield the same one or two “Location not available” and/or an unable to find OneDrive dialog box(es).

Step 4a: Re-Setting Up One Drive

Unfortunately, this does not only happen when you remove the drive, it also gets disconnected after a system restart. Luckily, OneDrive works fine after putting the computer to sleep or shutting it down. So to get OneDrive to work again after a restart, you would have to remount and reconnect as shown in Step 4a: Re-Setting Up One Drive.

Hope this works for you. Let me and others know in the comments if you guys find a better way. Thanks!